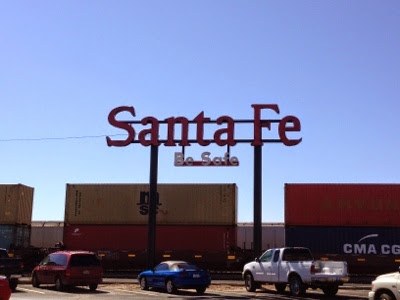 Over the past few evenings I have been putting alot of focus on structures for the layout. This particular industry we are going to discuss is kitbashed from Walthers and Pikestuff kits.
LAKES FOREST PRODUCTS
Being I model Mid-Michigan having a building products distributor just seemed to be a natural fit and solid decision for an industry.
Using some Bing.com Birdseye views of the BlueLinx facility in Fort Worth, I got some ideas and set forth to create the facility. 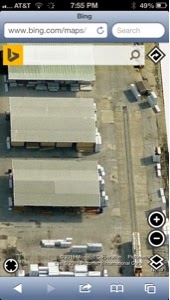 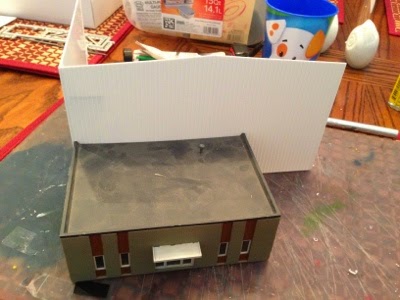 Mockup of office and warehouse together. 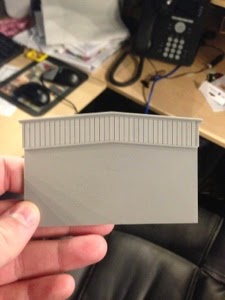 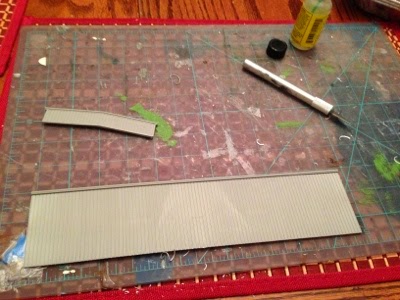 After cutting the end needed side walls for shed. I cut these from the warehouse wall. 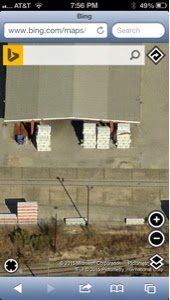 A side profile of the BlueLinx lumber shed. 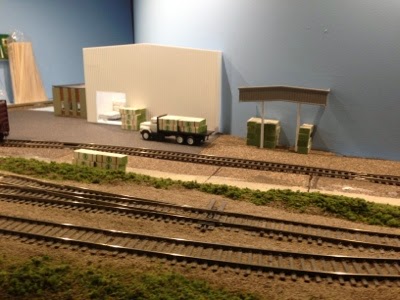 The warehouse was straight from Walthers corn unloading kit, obviously only using some of the walls. Being lumber can be wide I lengthened the width of the roll up door. 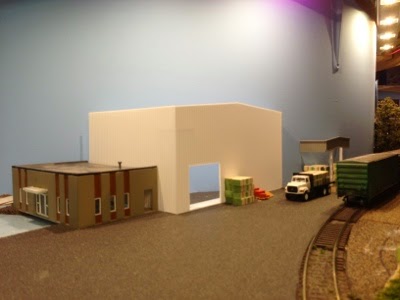 Another view after initial construction. Gotta get the roofs cut and a good coat of paint on the structures.
I plan to use a panoramic of lumber yard behind the shed to help with blending into backdrop.
This industry will be details galore once complete and also the first completed industry.
Stay tuned for more this weekend.
GM
Posted by Greg at 6:06 PM No comments:

February has been a crazy hectic time around the house, which means not alot of time for model railroading. I however had a few hours over the Presidents Day Holiday to install a sound decoder.
During these few hours I installed a Soundtraxx AT-1000 EMD 645 sound decoder, Soundtraxx Current Keeper, and Railmaster Hobbies DS1425-8 speaker into the freshly painted EMD SD40M-2. 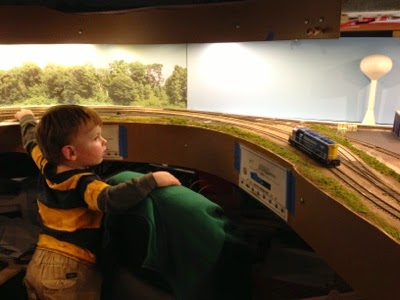 Tonight my son and I finally had the opportunity to program and test out the engine. This is what it's all about - enjoying the layout and hobby with the family. The kid was working the ground on Bay Yards east end observing the new sound coming from MCIS 4059.
I hope to get a little scenery done on this section toward the end of the month.
GM
Posted by Greg at 7:39 PM No comments: 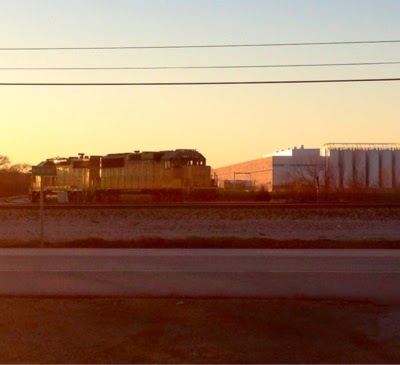 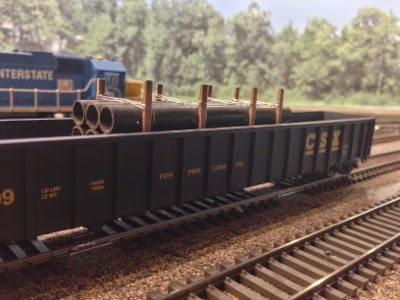 EPCOT - Experimental Prototype City of Tomorrow
For this post we are going to hop over to another theme park on property which will require admission but is a great place to visit in my experience. Quick note; where we are going is a bit of a hike from the EPCOT entrance so you will get a good workout in the process. Well worth it I promise.

Upon entering the park one cannot but notice the giant geodesic sphere that is known as Spaceship Earth. This ride is a ton of fun learning about human communication but we cant stop there right now we have 1.5 mile hike ahead of us to the back of the World Showcase...... We are heading to the Germany.

So this journey we embarked on leads us to one of the nicest garden railroad displays that I have seen in person ever since the Home & Garden Show of 1996 at Cobo Hall in Detroit that inspired my father and I to go outside with LGB.

The layout consists of three independent operating loops with a walkway through the center and ability to view from three of four sides.

Credit to the Walt Disney Company for recognizing the impact LGB from Germany has made on the large scale market we enjoy today. No better way to see this setup than to enjoy it in person while sipping on a cold brew and having famous apple strudel from one of the German quick service restaurants located at the pavilion.

So lets get to what everyone wants.... the pictures.


I hope everyone has enjoyed the three part series on Walt Disney World & Railroading. On my next journey we will visit Animal Kingdom and have the opportunity to report back on the African themed train operation along with providing a ride-a-long experience of the WDW Monorail System.

Thanks for stopping through and taking the time to view! This was a little different than more normal layout related posts but variety is the key. My goal was to provide a chance for those who have not been to Walt Disney World or who have been but not experienced a small preview of the fun that is in store in relation to railroading.

Setting The Stage
As you approach the park from the water, bus, or monorail one of the first things that stands out other than Space Mountain and Cinderella's Castle is the Walt Disney World Railroad Main Street station. As you get closer to the park entrance the focus really is on Main Street Station and the Castle / other attractions are hidden. Disney designed this for a reason and the station you could say is the gateway to the experience. The trains run through here every 7 to 10 minutes so chances are as you walk up to the turnstiles and then pass through into the park you will encounter the sight, sounds, and smell of the WDW Railroad.

Window Details
One item that alot of people miss on their trip to the Magic Kingdom is the amount of detail and thought that the Disney Imagineers put into the park in subtle places. A good example is the center window in the station as it has meaningful words stating: "Walt Disney World Railroad Office - Keeping Dreams on Track - Walter E. Disney, Chief Engineer." It is hard to see in the photo below which I had taken back in 2009 but I promise you it is there. A neat fact I learned from a cast member is this window sign writing is the only one visible from outside of the park. All of the other window sign writing is on the other side of the station and along Main Street.


The Railroad Itself
Alot of great information abounds on the web regarding the Walt Disney World Railroad Company. I do not want to detract from this but instead at the end of my post I will have links that you can follow to good sites with good facts / stats about the railroad. This post is going to be from my perspective as a guest in the Magic Kingdom.

The railroad is a closed loop narrow gauge system that circles the outer perimeter of the Magic Kingdom. Towards the northeast corner of the railroad around Fantasyland Station is a spur that leads to the maintenance shop facility where the locomotives and cars are maintained. There does appear to be a simple signal system that you can see as you are at the stations and on the route that keep each of the trains spaced apart. On the loop around the park the railroad operates three stations that allow guest to board or disembark from. You have to wait in line at any of the three stations, but once aboard you can ride the train as long as you would like until it no longer runs at the end of the operating day. I cannot confirm but from my observation the day we were in the park there seemed to be three trains operating which was very fluid and the park was very crowded going into M.L.K. Weekend.

Locomotives
The engines on the railroad are steam powered and operate under their own power... no tricks or third rails here. They build steam by burning Fuel Oil that is stored in the tenders along with the water needed for the steam. Their is a water tower and dump pit at Fantasyland Station which on every 3rd or 4th trip required a stop for water refill. Some of the servicing can be observed and not to mention great photographic opportunities on the walkway between Fantasyland and Tomorrowland. For more specifics on each of the engines please check out the links to different web resources.


On Board Experience
The weather in early January in Central Florida is brisk and requires a light jacket / sweatshirt no doubt. This Friday was extremely sunny with a nice breeze. All three of us boarded the train at Fantasyland station for a round trip around the Magic Kingdom giving our feet a rest and just an opportunity to enjoy one of the original attractions that opened with the park in 1971.

On-board the ride experience is one that you would expect from a steam powered locomotive and the awesome story telling that Disney does so well: sight of the steam, sound of the whistle, classic chuf, and the smell of the fueloil being converted into steam power. There is a great narration on-board that talks about the railroad, park, and different attractions from the "Conductors" point of view. Making the round trip journey we traveled from Fantasyland to Main Street USA to Frontierland to Fantasyland. We decided to stay on for one more leg and get off at Main Street USA, so we kinda did 1.5 trips. The primary single loop trip average to be 21 minutes.

While the railroad does not run after dark I could not miss out on the opportunity to take a photo of Main Street Station from in front of Cinderella's Castle at night, the picture is unique with the sea of black all around the lighting outline of Main Street USA.
I hope you have enjoyed my second post on Walt Disney World & Railroading. If you have a chance to visit the resort and go the parks I highly recommend you take the time to ride the rails of nostalgia, relax, and let your senses do the work. For folks even more interested Disney does host a behind the scenes tour of their locomotive shops with a greater in-depth look at the engines. You have to book ahead, have theme park admission, and there is a cost but on my next trip I plan to do this.

The Smell of Fresh Paint

While I had planned to post part 2 "Magic Kingdom" tonight from my Walt Disney World Series, I was pleasantly surprised to have the post office make a delivery today.
The delivery was from Fred Fogelsinger who was working on a EMD SD45 to SD40M-2 conversion and paint for me. While the work done was minor in terms of body work it was key in the upgrade. 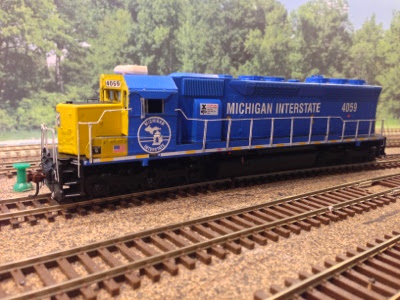 MCIS EMD SD40M-2 #4059 sits in Bay Yard after being delivered from Fogelsinger Rail Services by LSRC Interchange. The unit will move to the Mt. Pleasant this week for final setup and installation of ditch lights and new snow plow. 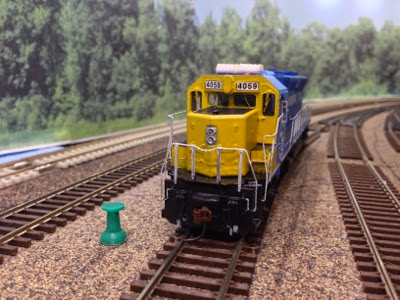 Front view of motor showing the headlight plated over in favor of the nose light. Two RV style A/Cs will bring some relief in the humid Michigan summers. 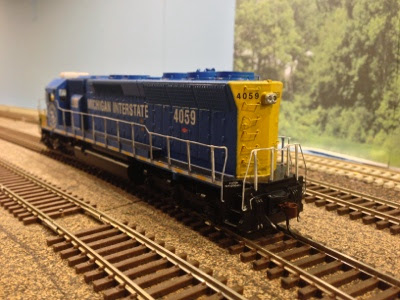 Rear view of unit showcasing the no longer present rear number boards. This is feature that new and rebuilt hood units are receiving.
This units lineage started on the CB&Q followed by BN, SP, and finally NRE. MCIS picked up the unit in 2012 finally making the rebuilt/paint shop in 2014.
GM
Posted by Greg at 7:48 AM No comments: