Just like that summer is a few days away from being a memory. This time of year I know alot of you begin ramping up work on your model railroads. Around here work on the physical layout infrastructure was non-existent, however there are plenty of other items to address on a operating layout to keep it in good working order. This month I am going to take a different approach then my normal all things update and instead focus on the railcar fleet. Follow along as we look at part 1 of Fleet Management, Fleet Statistics, and Fleet Projects.

FLEET MANAGEMENT
Operating a roster 226 cars take work.... literally. I don't know how the guys with 800+ cars do it. The past few months have seen quite a few cars added to the roster with a few leaving, it is important to maintain a good record of that change. Cars that were added needed inspections and a waybill holder with car information. Similarly cars that went to new homes whether trade or sold needed to be removed and their waybill card discarded. 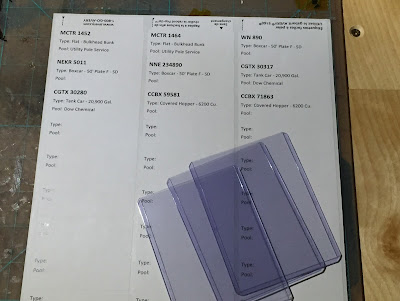 Identification stickers printed using excel database of cars added. Each car notes reporting marks, car number, car type, and pool (if applicable). The stickers are affixed to the plastic card shown. These cards then hold the blocking waybill for each car while in operation.

FLEET STATISTICS
Not to bore anyone with numbers, but using all of the data from the master database i collected for the active fleet, I was able to look at different charts to tell a story about the mix on the layout. Lets take a look at a few graphs. 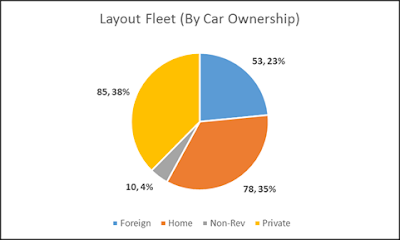 First and foremost our data is based on 226 active cars as of September 1st, 2017. We can see the mix of Home Road, Foreign Road, and Private car is roughly split in thirds. Of note the private fleet is the largest which makes sense with growing private owned cars on the rail network in 2017. 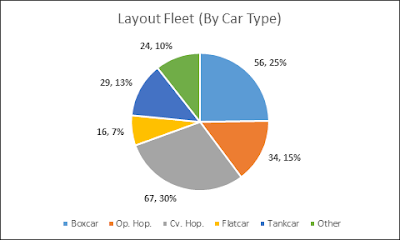 The car type analysis should not be a surprise to anyone since the main commodities hauled are agricultural products (covered hoppers), aggregate/sugar beets (open hoppers), and paper/forest products (boxcars). The "Other" category includes centerbeams, airslides, and reefer type cars that are more "boutique" in the work they perform.

Going forward what type of trends can we expect to see...


FLEET PROJECTS
We all that storage spot where good projects go to be put on hold.... Yep I have one of those as well. One Saturday at the end of August I took fifteen minutes to walk through each car and what was needed to restore it to service. All of these cars operationally could operate with metal wheels and good couplers, however their "story" needed to be changed before they were to operate.


Patching was done using brown or green sharpie paint pens. Easy to use and fast drying highly recommend. Reporting marks were done using Microscale Railroad Gothic / Compressed Gothic sets of different sizes. Reflective decals are by Microscale, and the grafitti decals are a mixture of Microscale and Blair Line. 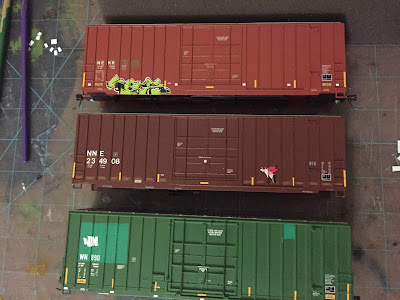 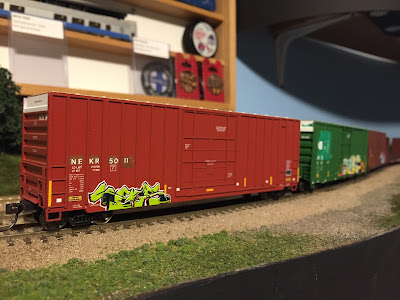 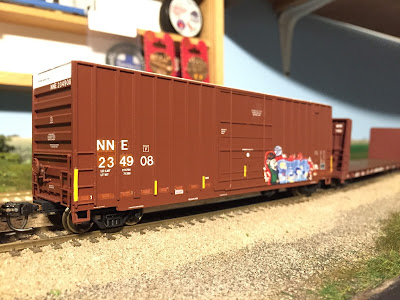 2. Utility Pole Bulkhead Flats
These two MDC kits had been painted by Fred Fogelsinger about two years ago. I had just discovered them one evening going through boxes of train stuff in the garage. Using the CN bulkhead decal set from Highball Graphics I was able to put together all the data required with MCTR reporting marks. The last thing left to add are the PC&F log bunks from Details West and utility pole load from JWD. 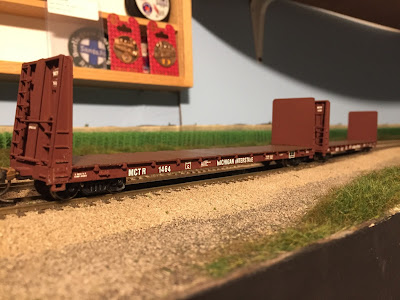 3. 20,000 Gallon Tank Cars
At a train show a few years ago I picked up each of these Athearn R-T-R 20,000 gallon tank cars in the BNSF scheme for $10 each. No box and a little use.... works for me. Well not needing them in diesel fuel service I proceeded to change up the cars to fit geographical needs. Using a modellers license I used the Highball Graphics CGTX 23,000 gallon tank car set. Instead of using black paint or decal solution to remove the print, I instead used a hobby knife with a flat blade and pulled across the logo and marks giving appearance like it had been "sanded off" by the shop shown in photo below. 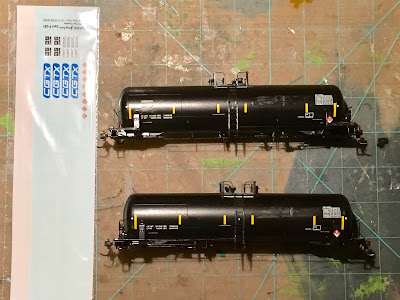 4. Plastic Hoppers
The same train show where i found the tankcars also produced two Walthers plastic pellet cars. However the reporting marks on the cars were duplicate to what was already on the layout. In the interim this was not an issue since I would only keep one car on the layout at a time. But needing more pellet cars provided an opportunity to update the reporting marks. I selected Highball Graphics CCBX (Union Carbide) decal set. While I did follow some reference photos of cars close to the ones represented by the decals, some modelers license was used. Graffiti decals are from Microscale and Blair Line. Seeing plenty of examples from the prototype photos, I decided to give drybrushing a try for weathering. Using Andrea Color acrylic paints of various brown and gray, I was able to give the cars some needed character. 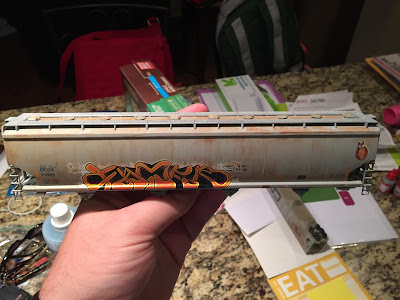 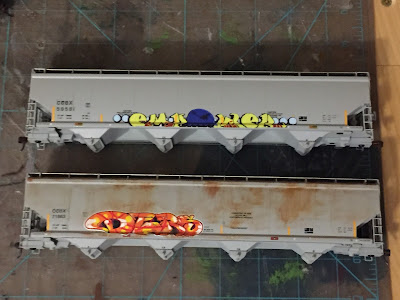 As you can see quite a few fun projects adding nine more cars to the fleet in part 1. The graphs help paint an overall picture that not only provides a story of your operations, but can also help establish discipline when it comes to selling or acquiring equipment. If you have 90 boxcars for one industry but you are short 10 covered hoppers for three industries, then maybe your focus should not be on that $10 Athearn R-T-R FMC boxcar at the next train show but instead a Athearn R-T-R Pullman Standard 4750 covered hopper.

Towards the end of September we will reflect and bid farewell to the Alco RS27, Alco C424, EMD GP15, and EMD CF7 fleets. Not wanting to leave out whats on the workbench right now, we will wrap up Part 2 of Fleet Management, Statistics, and Projects.

Thanks for stopping by. 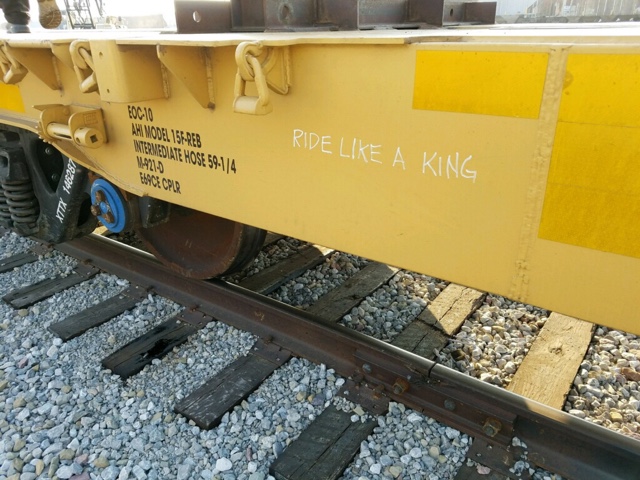 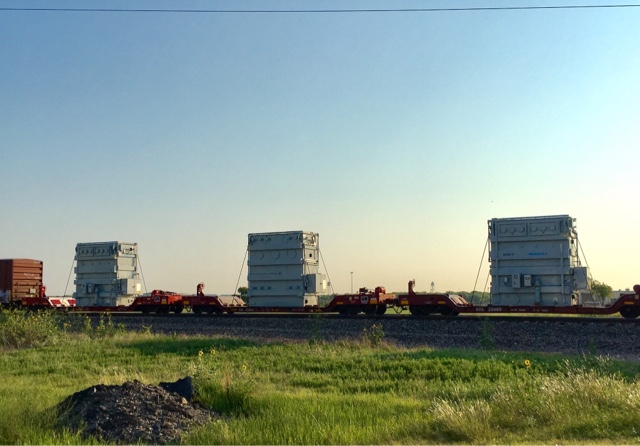