Here it is October 2nd and I am now just getting the opportunity to write my update post of August and September. Since my last post documenting the retirement of EMD GP30s from service, there have been quite a few changes to the layout that everyone needs to get caught up on.

ACTIVATION OF SD60Ms
July saw the departure of MCIS EMD GP30 and GP60 fleets. To help offset MCIS had purchased a three unit fleet of EMD SD60Ms in 2016 when they had been parked. At the time the units were stored for overhaul and eventual re-activation.  MCIS 6085 and 6086 released from MAC Rail in September and went into service equipped with Soundtraxx Tsunami2 sound. MCIS 6087 expected to be in service January 2019.

All three motors came from BNSF and have been equipped with PTC equipment to operate over CN trackage rights and GPS for e-DTC operation on home rails. 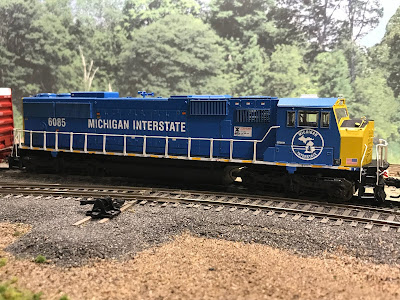 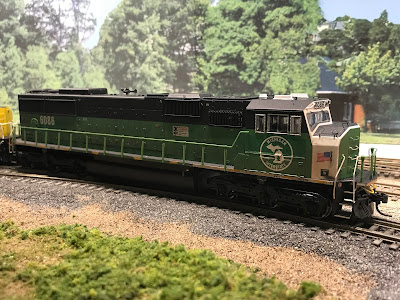 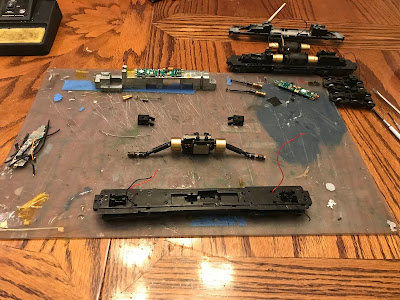 Both motors were hard wire rebuilt from the trucks up to improve performance.

IT ALL BEGAN WITH A BOOK
For sometime I have struggled to find the right fit of industries for my Bay Industrial Spur. While it did host a river side cement terminal, asphalt terminal, and corrugated box plant it felt too crammed. After reading Bernie Kempinski's recent Waterfront Terminals and Operations book I was inspired to make changes, all due to modeling a boat...... A good friend and modeler told me earlier this summer "While you have the generic midwest theme going on, a lake freighter would firmly plant your layout on the Great Lakes", and he was absolutely right! Seeing that Deans Marine model on Bernie's layout sold me, now to figure out the plan.

Part 1 - Location
So like a good plan I started to sketch out ideas on napkins or printer paper to get a feel of what would work. 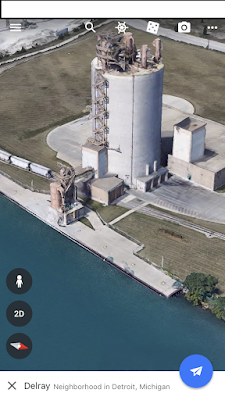 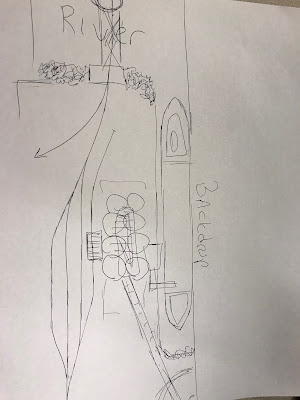 Sketching up the idea

Using the prototype, a common boat / rail served industry all over the lakes is cement. I already had the Graystone Cement terminal but it was against the backdrop. Trying to weight all my options I looked at placing a lake freighter on the backdrop behind the silos but the mock-ups didnt look that good. So how about a full scale model... 6" wide x 56" long.....will need some real estate. 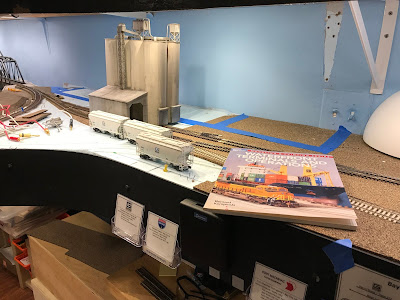 Mocking up where boat would go with culprit inspirational book.....

After reviewing the space needed for a smaller cement laker / barge slip I was comfortable with sacrificing the space to help create a more immersive industry. It was not until this point that the area finally felt balanced with only having one industry.

Using my jigsaw I made quick work of cutting the 2" foam out from the river crossing up 60" to the entrance to the layout. I ended up cutting a width of 8" to allow for room for pilings / piers and placing a good backdrop behind where the ship will go. Using the cut foam I traced onto OSB and replaced back in its place. The neat part is the river scene and boat slip are connected bringing a better waterfront feel. 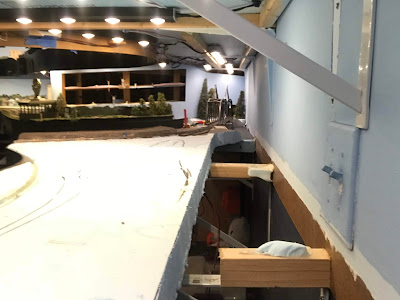 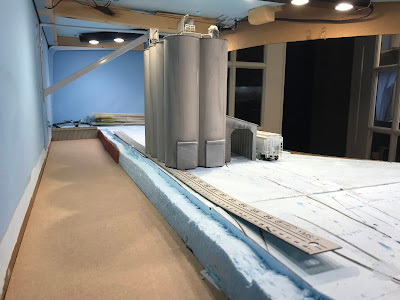 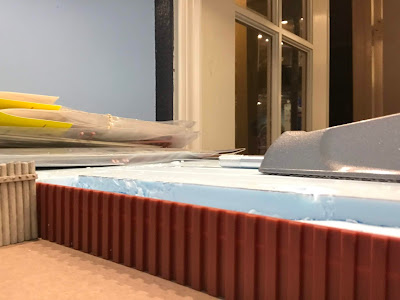 This fall will see the completion of the dockside scene with painting the OSB and deciding if I will use water or just clear coats to show water depth.

Guess with the work done, now I need a boat.... hope I can find something maybe even a barge / tug combo ever so present on the Great Lakes now.

Part 2 - Find a Boat
Searching for a 1/87 is not exactly easy and there are kits but to get a modern like boat I needed some help since Bearco Marine does not appear to be in business anymore. Low and behold I found a kit on Ebay that was of the Amoco Indiana tanker. I had talked with a few modelers who had kitbashed the Sylvan laker and gave me their opinions to consider based on what I wanted to accomplish in the end. Taking all the input and being a modern era layout, the Bearco kit seemed like the best choice. Thanks again to Mat Thompson, and Ken Larsen for answering my questions on the lake freighter path. 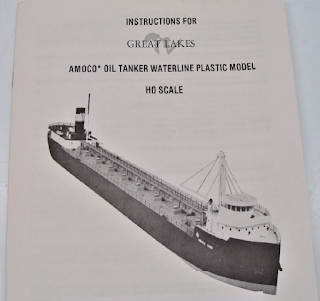 The box for the kit was well big.. Ended up doing UPS customer pickup so I could take the directions on vacation and read through them no less than a dozen times. This was a craftsman kit, and the opportunity to build was going to take my modeling skills to a new level. 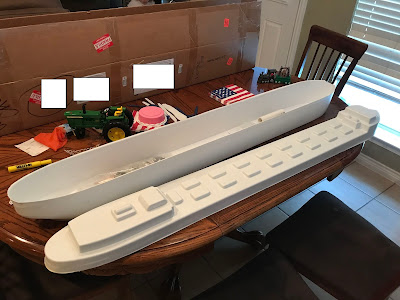 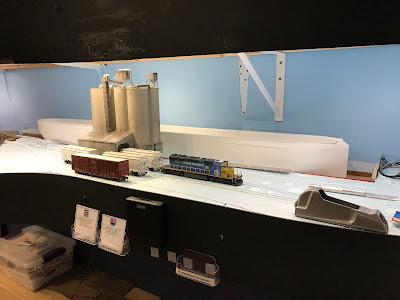 Part 3 - M/V Graystone Conquest (Launched)
Suppose the easy part of figuring out the location and buying a boat were done. Now came the task of putting my modeling skills to use and build the laker.

After reading the instructions no less than two dozen times by now, I started on the ship. First thing to do was trace the bow - deck - stern as the hull has alot of excess vacuum formed plastic. 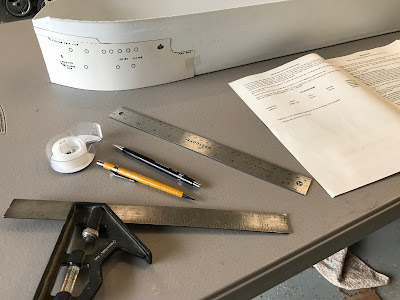 Beginning the journey, tools of the trade 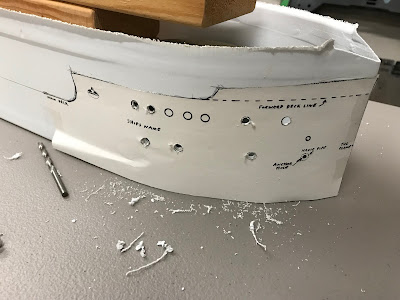 Tracing the bow / drilling out the portholes

Working with a good friend who is a woodworking shop, we used a dremel mult-max to cut down the hull to the right height. From there it was going to be old fashioned sweat to get the ship level and prepared for moving further with the build. The directions are well done and keep you on task in order. Mind you this is all happening outside during the heat of August in Texas.... Call it exercise. 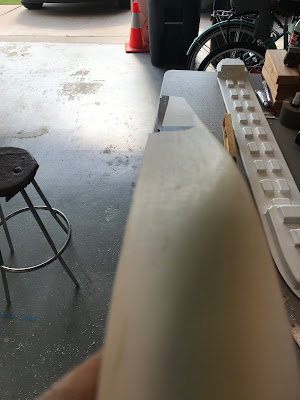 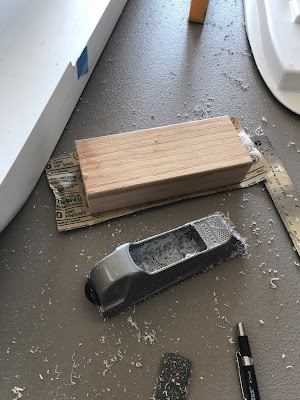 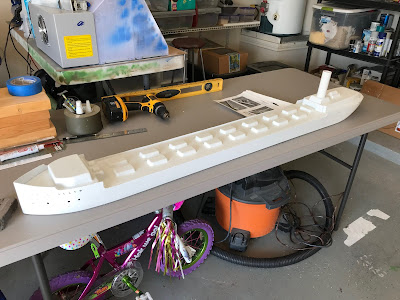 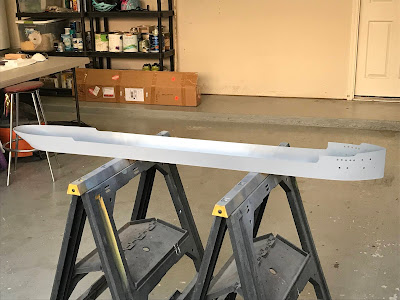 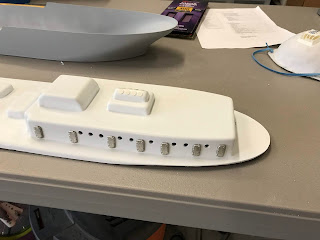 As I was installing the door castings, I realized that even with a good smooth back the door had a gap between them and the rear cabin wall. For this project I used the Vallejo plastic putty in the fine applicator packaging. This stuff is great. Once the door were properly sealed I painted the forward and rear cabins flat white. The forward, main, and rear deck received aged concrete color with a weathered chalk effect from Rustoleum. The hull received a satin winter gray which was slightly darker than the primer. 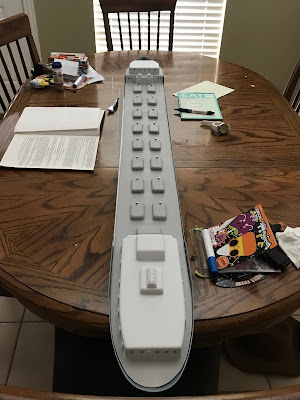 Boat is beginning to take shape

Once the hull and deck are cut to size, test fit, glued together, and painted it now becomes a process of detailing out the boat to the modelers preference. The kit comes with a great assortment of white metal cast pieces that I will be using. Since this is a freelance cement laker, the walkways and vent stacks for the intended tanker kit will not be used.

From here the kit comes with stripwood and styrene sheets needed to fashion different parts of the boat. I decided to use Microscale Krystal Kleer for the port holes versus the clear plastic sheet. I forgot to mention this has to be done after painting the sections, but before the deck and hull are glued together. 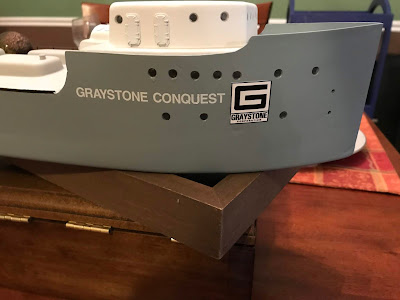 The next step was putting down the stripwood along the sides of the main deck for the handrail stanchions which were to be a made from piano wire supplied. I wanted to have a more detailed ship so in short order 1/96 scale brass stanchions were on there way from Maine curiosity of BlueJacket Shipcrafters. This model company does some amazing work and stocks everything needed to detail out your ship. Once stanchions were received used the appropriate size bit to drill holes on 7/8" intervals. I fashioned a styrene template to help keep consistent spacing. 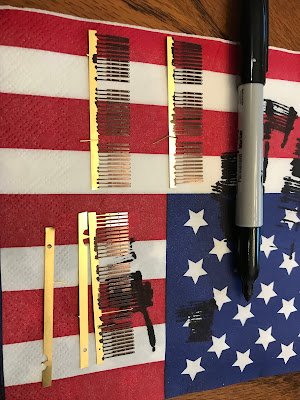 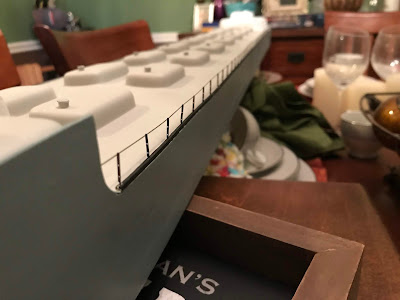 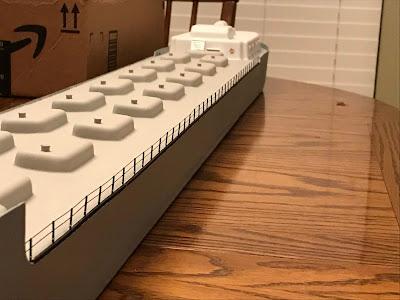 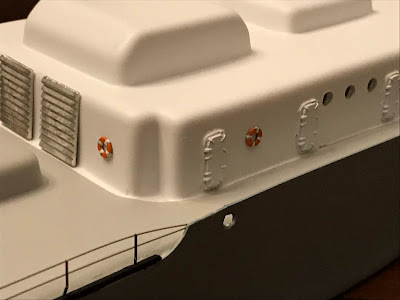 With work completed on the main deck handrails, the next area of attention is the stern. This is where I am currently working. I began with the template supplied in the kit and traced out the shape onto styrene sheet supplied. From there it was a matter of cutting out and trimming to fit. Once in place there are lot of details that will be added. Based on the directions, the stern will be completed before moving to the bow. 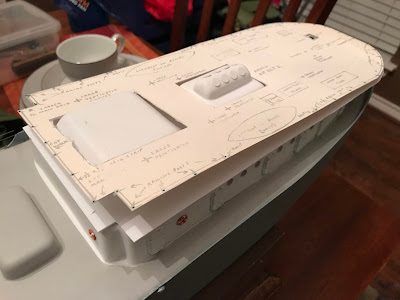 Template over top of stern with styrene rough fit. 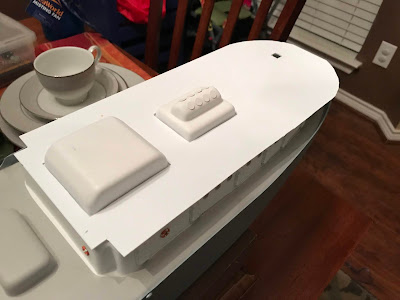 This gets us caught up on the work happening on the layout. I expect to have the stern mostly completed by November. This month is travel intensive for work so time may not be as readily available, luckily temperatures are beginning to "cool" off here in Texas.

Alot of great things to come this fall with the cement terminal and lake freighter. I didnt even mentioned where the corrugated box plant and asphalt terminal went.... until next update.